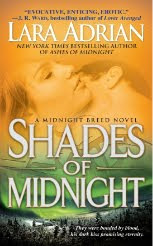 SHADES OF MIDNIGHT
Author: Lara Adrian
Source: Library
SYNOPSIS:
IN A FROZEN WILDERNESS STEEPED IN DARKNESS, THE LINES BETWEEN GOOD AND EVIL, LOVER AND ENEMY, ARE NEVER BLACK OR WHITE BUT DRAWN IN SHADES OF MIDNIGHT . . .
Something inhuman is stalking the frigid Alaskan wilds, leaving unspeakable carnage in its wake. For bush pilot Alexandra Maguire, the killings stir memories of a horrific event she witnessed as a child and evoke in her the inexplicable sense of otherness she has long felt but never fully understood . . . until a darkly seductive stranger with secrets of his own enters her world.
Sent from Boston on a mission to investigate the savage attacks and stop the slaughter, vampire warrior Kade has his own reasons for returning to the frigid, forbidding place of his birth. Haunted by a secret shame, Kade soon realizes the stunning truth of the threat he faces–a threat that will jeopardize the fragile bond he has formed with the courageous, determined young woman who arouses his deepest passions and most primal hungers. But in bringing Alex into his world of blood and darkness, Kade must confront both his own personal demons and the even greater evil that could destroy all he holds dear. . . .
MY THOUGHTS:
I am a big fan of Lara Adrian’s Midnight Breed Series.  She always has the edgy writing and fantastic characters in her books.  They are easy to follow and a joy to read!  Shades of Midnight is the story of Kade and Alexandra.  I, for one, have been looking forward to Kade’s story.  His humor with Brock and the other warriors always had me laughing.  The story moved nicely, but I just couldn’t bring myself to enjoy the romance in this book. To me it fell flat.  It was too rushed with not much conflict between the two.  I also didn’t like that there wasn’t much of the other Order members in this book.  They came toward the end of the story, but frankly,  after seven books in a series, you still want to read about the others as well.  Otherwise, you forget about the previous characters and find yourself wondering who everyone is again.  We didn’t get any contact with Dante, Rio or any of the females.  Hardly any dialogue with Lucan, who is the leader.  Not much action in this book as well.  It just had a lot of filler in it that didn’t hold up to her other books in the series.  I am still pleased with the book and I will continue to read the next ones, especially since Brock is the next warrior that will be featured.
MY RATING:

3 Responses to “SHADES OF MIDNIGHT by Lara Adrian”