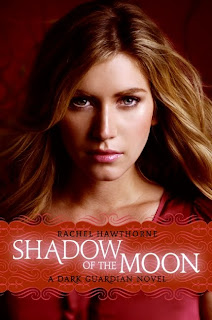 SHADOW OF THE MOON
A Dark Guardian Novel #4
Author: Rachel Hawthorne
Source: Library
SYNOPSIS:
I can feel every Shifter’s emotions except Daniel’s—the only one whose heart I long to know.
Hayden was born a werewolf, a Dark Guardian. But her ability to sense the feelings of fellow werewolves has made her life unbearable. She runs away, only to be tracked by charming, mysterious Daniel, a newcomer to the pack and the one Shifter immune to her powers. As she reluctantly follows him home, Hayden finds herself falling dangerously in love. . . .
But even as her feelings for Daniel deepen, Hayden begins to wonder if he is who he claims to be. Where did he come from and why has no one ever seen him transform? When they stumble upon the body of a Shifter still in wolf form, her worries grow. Someone is killing her kind. Is her handsome tracker really a hunter? And is Hayden now his prey?
MY THOUGHTS:
This series has been hit and miss for me.  While I enjoyed a couple of books from this series, there was certain parts of each book that annoyed me.
With Shadow of the Moon, the author has grown with her writing skills.  It flowed better and made more sense with the plot and characters. I loved the story of Hayden and Daniel.  Both loners of the pack, but with a special skill in each one.  The only frustrating thing about this series is the women of the pack. Can they please get over the sacraficial lamb part of their personality already? Can they just fall in love with their mate as quickly as their male counterparts and quit trying to sacrafice their feelings and emotions for others?  Kick butt already and claim those hunky men the author is trying to pair you up with already!  It is very annoying!
Overall, this book was my favorite of the series I think.  The story of Hayden and Daniel was written so much better than the others.  One I would read again.
MY RATING: