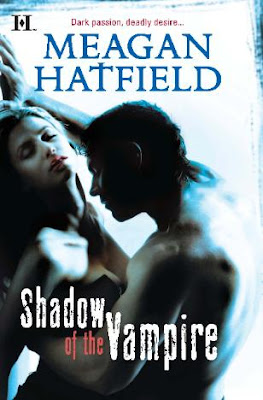 Even vampires should never sleep with the enemy.

Vampire princess Alexia Feodorovna has been undead for 125 years, so it’s been a while since any man has made her pulse race. Until Declan Black. One look at his bronzed body and a fire like no other consumes her. Then she discovers that he’s a dragon lord come to take revenge on the vamps who killed his parents. And claim a crystal said to imbue its owner with incredible powers.

Alexia is ordered to torture and kill the dragon lord. Yet with each reckless encounter, she finds herself consumed by his fiery passion. A passion Declan battles, as well. Will he be able to resist the fire of lust she kindles within him and keep revenge in his heart? Or will he risk everything to quench the burning desire and claim the vampire as his own?

Vampires and Dragons, oh my! Two types of paranormal creatures that are always hot and sexy! The cover is what attracted my attention to this book though.  The pose and lighting were sensual and breathtaking! It screamed for me to give it a try. After reading the summary as well, I knew I had to give it a try.

This book had promise from the first chapter.  I was intrigued and curious to see the struggle between Vampires and Dragons.  In this book they are enemies and both searching for a crystal that will either destroy the races or control them.  With Alexia on the verge of becoming Queen of the Vampires, she is in a race to find it before Declan, King of the Dragons, has a chance to find it.  With a Queen who is being brainwashed, a vampire daughter who is falling in love with the King of Dragons, the Queens fiancee who is evil and a bunch of side characters who can hold their own, you slowly become invested in reading the entire book.

I did however, have some disappointments with the story.  For one, there is a part of the story that focus’ on rape.  I didn’t like this part of the book even though I understand the need for it in the story.  To me, it wasn’t executed well, and Alexia didn’t portray what you would expect with rape.  I also felt the book dragging in a lot of the chapters.  I wanted it to pick up the pace and get moving again.  At times, the story was a bit repetitive and could have been cut out of the book without any damage to the story.

I did however, like the writers writing style.  She has great talent in writing in this genre if she could just cut some things out of the stories to where the readers don’t feel like they have read the same thing twice within a few chapters.

Overall, I liked the story, but I didn’t love the story either.  I am looking forward to reading about the other characters in the book in the future, yet not as excited as I should be.