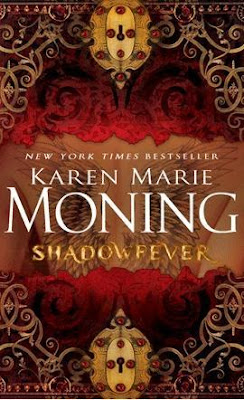 MacKayla Lane was just a child when she and her sister, Alina, were given up for adoption and banished from Ireland forever.

Twenty years later, Alina is dead and Mac has returned to the country that expelled them to hunt her sister’s murderer. But after discovering that she descends from a bloodline both gifted and cursed, Mac is plunged into a secret history: an ancient conflict between humans and immortals who have lived concealed among us for thousands of years.

What follows is a shocking chain of events with devastating consequences, and now Mac struggles to cope with grief while continuing her mission to acquire and control the Sinsar Dubh—a book of dark, forbidden magic scribed by the mythical Unseelie King, containing the power to create and destroy worlds.

In an epic battle between humans and Fae, the hunter becomes the hunted when the Sinsar Dubh turns on Mac and begins mowing a deadly path through those she loves.
Who can she turn to? Who can she trust? Who is the woman haunting her dreams? More important, who is Mac herself and what is the destiny she glimpses in the black and crimson designs of an ancient tarot card?

I am going to start this review with three little words. OH. MY. GOD!  Those three little words sum up my whole experience with not only this book but the whole series!  Before the Fever series, I was never one to venture into the world of Urban Fantasy.  I like my books to have lots of romance and sexiness to them.  Yet, after hearing Smexy Books and Fiction Vixen rave about them, I decided to dive in to the genre I was reluctant to swim in.

The book starts out with a grieving Mac who is in disbelief of who she just has killed at the end of Dreamfever.  Even though as the reader, we didn’t know who she had killed at the end, we all thought we knew.  When it is revealed who it is, I was at a loss for words.  I was crying and yelling at the author for putting us through this journey to just turn around and kill this person!  I actually wanted to stop reading the series at this point. After complaining about it to my online friends, they kept telling me to read more.  They said it will get better and I needed to start looking past that point in the book and have faith in the author.  I am so glad I listened!

I am not going to tell you who it was, but if you have read other reviews and noticed spoilers before, then you already have a clue to who it is.  All I can say is it does turn around and you will have your faith restored in the author.  This also means to be prepared for even more shocks to come.  I felt myself saying on many occasions that the author can’t be doing this to me!  She can’t do that!  Why must you torture us?  Why can’t you quit playing with my emotions?  Yet, as the story progresses, you will find strength in Mac and she has grown into a fierce and vengeful person.  She has her reasons for doing things, and boy do they push her to the limit.

For the romance readers out there, be prepared for the sexiness to heat up and you will be looking at different characters through different eyes by the end of the book.  You will see that all of those small players from previous books actually have important and critical roles in the whole scheme of the Fever series.  I was entranced with the Highlanders, in awe of Barrons and his men, captivated by the Fae, and strengthened by Mac’s determination.  No one is what you think, and the end was perfect.You will not expect the ending that the author delivers!

If you have not read this series yet, what the hell are you waiting for? As Fiction Vixen told me before, “Best UF series evah!”  I agree and will definitely be reading this series over and over again!

“I don’t have any idea what to wear anymore, so I tried to cover all bases.”
“Try skin.”
“Little chilly for that.”
We looked at each other across the coffee table.
His eyes didn’t say, I’d heat you up, and mine didn’t say What are you waiting for? He didn’t reply, Fuck if I’m making the first move, so I was careful not to say, I wish you would, because I can’t, because I’m… and he didn’t snap …choking on your pride?!
“As if you aren’t.”
“Excuse me?”
“Really Barrons,” I said drily. “I’m not the only one who didn’t just not have that conversation, and you know it.”
There was the faint, sexy lift of his lip. “You’re a piece of work, Ms. Lane.”
“Right back at you.”

“God Said: Let there be light!
I said: Say please.”

I think I’m under control, that I’ve stripped away all weaknesses. That committing to my mission has made me impervious. I’m wrong. The thought of Barrons smiling brings other thoughts.
Barrons naked.
Dancing.
Dark head thrown back.
Laughing.
The image doesn’t “gently swim up in my mind” in a dreamy sort of way, like I’ve seen in movies. No, this one slams into my head like a nuclear
missile, exploding in my brain in graphic detail. I suffocate in a mushroom cloud of pain.
I can’t breathe. I squeeze my eyes shut.
White teeth flashing in his dark face: I get knocked down but I get up again. You’re never gonna keep me down.
I stagger.
But he didn’t get up, the bastard. He stayed down.

“What part of ‘directly’ didn’t you understand?”
“Same part of ‘play well with others’ you never understand, O cantankerous one,” I muttered.
He laughed, surprising me […] “I’d be a lot less cantankerous if you admitted you wanted to fuck me and we got down to it.”

He strips his shirt over his head and I catch my breath, watching those long hard muscles ripple. I know how his shoulders look, bunched, when he’s on top of me, how his face gets tight with lust, as he eases inside me. “Who am I?”
“Jericho”
“Who are you?” He kicks off his boots, steps out of his pants. He’s commando tonight.
My breath whooshes out of me in a run-on word: “Whogivesafuck?”