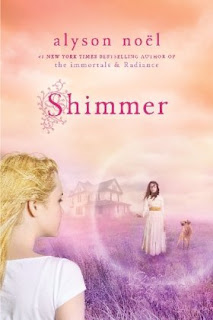 SHIMMER
A Riley Bloom Novel #2
Author: Alyson Noel
Source: Publisher
*I received this book free of charge in exchange for an honest review*

Having solved the matter of the Radiant Boy, Riley, Buttercup, and Bodhi are enjoying a well-deserved vacation. When Riley comes across a vicious black dog, against Bodhi’s advice, she decides to cross him over. While following the dog, she runs into a young ghost named Rebecca. Despite Rebecca’s sweet appearance, Riley soon learns she’s not at all what she seems. As the daughter of a former plantation owner, she is furious about being murdered during a slave revolt in 1733. Mired in her own anger, Rebecca is lashing out by keeping the ghosts who died along with her trapped in their worst memories. Can Riley help Rebecca forgive and forget without losing herself to her own nightmarish memories?

After reading and enjoying the first book in this series titled Radiance,  I couldn’t wait to see what the author would come up next for Riley!  I think these books are perfect for the younger teens, but as an adult, I enjoyed the series so far as well.


This time around, Riley finds herself trying to help an angry ghost named Rebecca.  Rebecca is angry about being murdered and is taking it out on other ghosts.  Riley needs to convince her that she needs to forgive and let go.


While this was a cute and fast read, it is not my favorite of the two books.  I enjoyed the first book so much more because we got to read about Riley’s adjustment to being in the afterlife.  This book focused more on Riley helping others accept death and adjusting to it.  While I know this is the next logical step in the series,  I wanted for more exploration of Riley and Bodhi. I had to keep reminding myself that this was a book for a younger teen! I still enjoyed the book, but not as well as the first book.  If you are a fan of this series, then I recommend picking it up and following the series as it continues to grow!