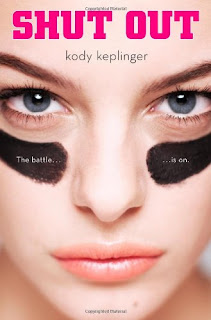 SHUT OUT
Author: Kody Keplinger
Source: Publisher
*I received this book free of charge in exchange for an honest review*

Most high school sports teams have rivalries with other schools. At Hamilton High, it’s a civil war: the football team versus the soccer team. And for her part,Lissa is sick of it. Her quarterback boyfriend, Randy, is always ditching her to go pick a fight with the soccer team or to prank their locker room. And on three separate occasions Randy’s car has been egged while he and Lissa were inside, making out. She is done competing with a bunch of sweaty boys for her own boyfriend’s attention

Then Lissa decides to end the rivalry once and for all: She and the other players’ girlfriends go on a hookup strike. The boys won’t get any action from them until the football and soccer teams make peace. What they don’t count on is a new sort of rivalry: an impossible girls-against-boys showdown that hinges on who will cave to their libidos first. But what Lissa never sees coming is her own sexual tension with the leader of the boys, Cash Sterling…


After reading The D.U.F.F. some time back, I just knew that I would have to read any other books by author Kody Keplinger in the future.  She has the talent to write from a teens point of view that truly captures the spirit of what teens are feeling in this angst filled part of life.  So when the publisher sent me Shut Out, I dived right into the world of teen drama and relationship heartbreak!


Most schools have a rivalry between other schools and their sports teams.  Unfortunately, in Lissa’s school the rivalry is between their own soccer and football team.  Pranks are common, up to the point of injury, while the girlfriends are neglected and thrown into social circles for the separate teams.  Lissa is tired of the bickering and the girls having to choose sides according to the teams. What is a girl to do? Go on strike with all of the girlfriends and refuse any type of romantic contact including make out sessions and sex if need be.  Yes parents, this book does have the dreaded ‘sex’ in it but honestly, what teen doesn’t know about the birds and the bees by high school?  I applaud the author for using this as a plot point for the book.


What this book also touches on is the power that women have in life.  Not just sex, but women also have the power to do things they set their mind to including using their brains to stop an old feud.  I also enjoyed the reference to the play, Lysistrata. I actually found myself checking it out at the library so I could have a better understanding of the book within this book.


The only thing that I did not enjoy about this book was the fact that it could be predictable.  Yes, you know what the outcome is going to be, but the way the author writes the characters you just forgot about predictability and enjoy the story unfold.


A great new young adult book that adults will enjoy as well.  If you are a fan of this authors previous work, then you won’t be disappointed in Shut Out.