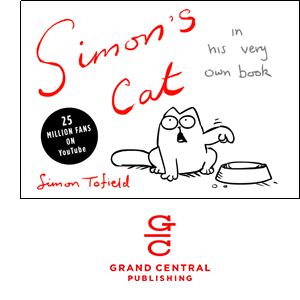 SYNOPSIS:
Simon’s Cat. Now in his very own book.

Based on Simon Tofield’s animations that have taken YouTube by storm with over thirty million hits, SIMON’S CAT depicts and exaggerates the hilarious relationship between a man and his cat. The daily escapades of this adorable pet, who will do just about anything to be fed, and his exasperated but doting owner, come to life through beautiful black and white line drawings. With a huge fan following that is growing even larger by the day, SIMON’S CAT is set to become a major new comic creation.

Simon Tofield is an award-winning illustrator, animator and director at Tandem Films in London.

This book reminds me of those Garfield books I used to get at the library when I was younger. Except this cat doesn’t talk. It features the dialogue as pictures only. I was not a fan of this book. Yes it had some funny comic strips in it and I can totally see my little hell cat doing some of the things this cat does in the book, but I just couldn’t really get into it. It says that it could be for all ages but I think a child would enjoy this book better. Don’t get me wrong! I love cartoon books! This one just wasn’t my cup of tea I guess you could say. Would be great for a small gift for a child though.

One Response to “SIMON’S CAT by Simon Tofield”