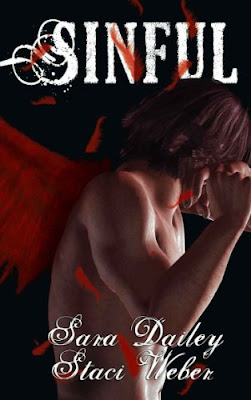 SINFUL
Author(s): Sara Dailey and Staci Weber
Source: Author Submission
*I received this book free of charge
in exchange for an honest review*

After the death of her mother, seventeen-year-old Elizabeth Carrington is starting over. In a new city, at a new school, and with a dad she hardly knows, it isn’t going to be easy. Trying desperately to find her way and cope with her unceasing grief, she finds herself surrounded by a force so compelling, so comforting, so captivating that she can’t deny its presence and soon fears that if it were to leave her, she might lose her very self. But is it all really happening or has her wavering sanity finally found its breaking point? Michael’s role in this world has been the same for centuries, but now something is different. He is inexplicably drawn to an intriguing stranger so alluring that he can’t force himself to resist her. Is he willing to risk everything to be with her, even falling? A dark force, hell bent on destroying any chance of happiness for his arch nemesis Michael, is lurking in League City, TX, and there is no limit to his need for vengeance. How far will he go to seek revenge for his sworn enemy’s betrayal? Caught in a clash of good versus evil, Elizabeth soon finds herself in the crosshairs of a battle that has been brewing since long before she was even born.

When Elizabeth’s Mother passes away after a battle with cancer, Elizabeth feels a calm and reassuring presence around her.  At first she thinks it may be her Mother’s spirit trying to comfort her after the loss.  When Elizabeth moves to Texas to live with her Father, she starts to think it might be an angel who is keeping her company instead.

I found the writing to be refreshing in this book.  For once, the characters that are teens, actually talk and act like teenagers!  They actually had the attitude of a teen with all of the school drama that actually is real! While I enjoyed the characters and the story plot, there were a few problems that I had with the book.

First of all the romance between Michael and Elizabeth was so rushed that it almost was instantaneous.  After Michael reveals himself to her, they are madly in love and know that they are going to be together forever.  Some parts of the book were also choppy in story with the time line jumping ahead too quickly.

What I did love about this book though was the constant suspense and high points of the plot.  Just when one climax of the story hit, and you thought that would be the end, it would build to another one before you even knew it.  I was constantly surprised at the different roads the author(s) would take us down.

The side characters were also a delight.  While we don’t get to meet Zander, the head angel, until near the end of the book, he was still memorable and made the chapters great.  Lauren and Amy were fun friends to Elizabeth that you would see at any high school.

While there was good and bad of this book,  I still felt this an enjoyable and entertaining read. I liked the good versus’ evil Angels and the romance that was intertwined in it.  Daniel himself, played an evil angel that you love to hate, but find yourself hoping for the best in him.  I can’t wait to see what the authors will bring to us next!