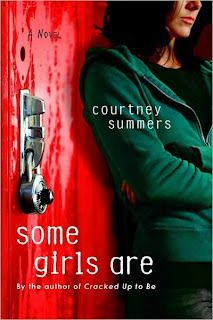 SOME GIRLS ARE
Author: Courtney Summers
Source: Library
SYNOPSIS:
Climbing to the top of the social ladder is hard–falling from it is even harder.  Regina Afton used to be a member of the Fearsome Fivesome, an all-girl clique both feared and revered by the students at Hallowell High… until vicious rumors about her and her best friend’s boyfriend start going around.  Now Regina’s been “frozen out” and her ex-best friends are out for revenge.  If Regina was guilty, it would be one thing, but the rumors are far from the terrifying truth and the bullying is getting more intense by the day.  She takes solace in the company of Michael Hayden, a misfit with a tragic past who she herself used to bully.  Friendship doesn’t come easily for these onetime enemies, and as Regina works hard to make amends for her past, she realizes Michael could be more than just a friend… if threats from the Fearsome Foursome don’t break them both first.

Cracked Up To Be.
MY THOUGHTS:
I thought my high school years were bad, but this book just reminds me that I could have had it worse!  The author did a wonderful job telling this story!  At the beginning of the book, Regina is at a party with the rest of her friends. They are all the top five kids of the popular ladder at school.  When Regina’s best friend Anna passes out at the party,  Anna’s boyfriend tries to rape Regina.  The only person she tells is Kara, the odd one of the popular group.  Now, when I say odd, I mean psycho!  The next school day, everyone believes that Regina and Donnie had sex instead of it being an attempted rape. Regina must now come to terms of no one believing her and finding herself the least favorite person at school now.
Regina finds a friend in Michael, who was labeled as an outcast by the popular crowd.  She sits with him at the famous table by the garbage cans.  She quickly finds herself becoming friends with Michael, but he is not going to make it easy for her to apologize for all the wrong she has done to him.  Michael ends up being Regina’s saving grace or her chance to redeem herself from being labeled a bitch.
The romance between the two was so touching and sweet.  Where were the Michael’s when I was in school?  I will say that this book will have your emotions in overdrive at times.  I felt a lot of anger and frustration at the peers that were treating Regina so badly.  It helped me sympathize with her though throughout the story.  When she keys a car, takes a beating and puts her friendship on the line for Michael, you can’t help but feel for Regina in this book even if she was a bitch to begin with.
Overall, this book was amazing. It was more than what I expected and beyond.  The pace was perfect, the characters were perfect, and the whole book in my opinion was perfect!  I was up most of the night reading and rereading this book because I didn’t want the story to end.  A wonderfully written story focused on teenage years that will have an impact on even the adults! Bravo Ms. Summers for reminding me that it is not who is popular in school, but who is the true friends that will stand by you!
MY RATING:

3 Responses to “SOME GIRLS ARE by Courtney Summers”