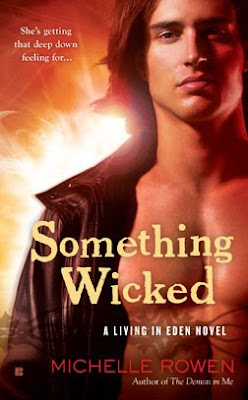 Darrak, the demon inside of Eden Riley, is able to take physical shape during the day. And Eden wouldn’t mind getting her hands on him-if it wasn’t a threat to her immortal soul. But while trying to rid themselves of the curse that binds them, they could get the distance they need…or each have their own private hell to pay.

Something Wicked is the second book in A Living In Eden series by author Michelle Rowen.  In the first book, we read about Darrak possessing Eden’s body and learning about the witch’s curse that he has.  We learned that he is a Demon who is slowly killing Eden by sucking away her life energy whether he wants to or not.  Darrak has been possessing people for over 300 years and within that time, he has slowly begun to acquire some humanity.

While trying to find a powerful wizard to break the curse, Eden and Darrak run into another archdemon, who just so happens to be Darraks best friend from Hell.  While, Theo was as bad as a Demon visiting Earth can be, I still enjoyed his character enough to see what was going to happen between Darrak and Theo.  I wanted to know if Theo was going to be the typical Demon and betray everyone he knows.  The addition of a new neighbor next to Edens apartment was also a nice story that intertwined with the plot.  Considering who the new neighbor is, it makes for some interesting reading once Darrak and Eden figure it out.

Now just because Darrak and Eden aren’t suppose to be romantically involved, doesn’t mean the book lets us down on the sexy factor!  The scenes that are in the book are smoking hot and can make you envious for your own Demon!

While I liked this book as a sequel, I didn’t enjoy it as much as the first book.  Darrak did have his Demon personality out more in this book than his humanity personality.  There were times I just wanted to have Eden exorcise him and end it already because of his smart ass attitude and lies.  But just as I was hoping Eden would call Demon-Busters-Are-Us,  Darrak changes my feelings with his smooth talking persona.

While I still enjoyed the first book better than this one, I am still looking forward to the final book in the series.  Their are some storyline plots that I just need to know about, such as the mysterious captive in the dungeon, and I need to know if this sexy couple is going to get their happily ever after!