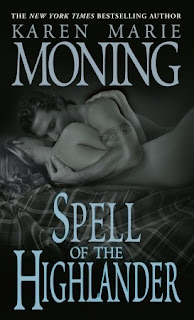 
Jessi St. James has got to get a life. Too many hours studying ancient artifacts has given the hardworking archaeology student a bad case of sex on the brain. So she figures she must be dreaming when she spies a gorgeous half-naked man staring out at her from inside the silvery glass of an ancient mirror. But when a split-second decision saves her from a terrifying attempt on her life, Jessi suddenly finds herself confronting six and a half feet of smoldering, insatiable alpha male.


Heir to the arcane magic of his Druid ancestors, eleven centuries ago Cian MacKeltar was trapped inside the Dark Glass, one of four coveted Unseelie Hallows, objects of unspeakable power. When the Dark Glass is stolen, an ancient enemy will stop at nothing to reclaim it, destroying everything in his path–including the one woman who may just hold the key to breaking the ninth-century Highlander’s dark spell. For Jessi, the muscle-bound sex god in the mirror is not only tantalizingly real, he’s offering his protection–from exactly what, Jessi doesn’t know. And all he wants in exchange is the exquisite pleasure of sharing her bed.


Yet even as Cian’s insatiable hunger begins to work its dark magic on Jessi, his ancient enemy is about to obtain the final and most dangerous of the Unseelie Hallows–and the ninth-century Highlander must stop him from getting it. Nothing less than the very fabric of the universe and two passionately entwined lives are at stake–as Cian and Jessi fight to claim the kind of love that comes along but once in an ice age. . . .

After reading the Fever series by this author, I just knew I was going to have to read her other books.  The only thing though is that I had never really read a book involving Highlanders.  I didn’t know what to expect because I thought a Highlander would be set in the past.  I certainly didn’t expect a Highlander to be so sexy and drool worthy!


When Jessi — who is swamped with school work and such — is asked by her professor to go sign for a package at his office while he is in the hospital, she never expects to fall into a world full of supernatural beings and a gorgeous man to protect her.  She unknowingly uncovers a mirror that is a relic of the Unseelie.  Inside this mirror is a tall and certainly sexy man.  Jessi thinks it is her overtired mind causing hallucinations and a man in the mirror is a figment of her imagination.  When she finally accepts that Cian MacKeltar is real, she has to make a choice in helping him or running for her life.


Karen Marie Moning gives us her witty humor, sexual tension and dark suspense that she has  never failed to give us.  Her writing is exceptional and definitely has me craving the other books in this series.  While this was the seventh book in the series — before spinning off into the Fever series — it can be read as a stand alone novel.  With that being said, when you meet the side characters of the book, you will be scrambling for the others like I am.