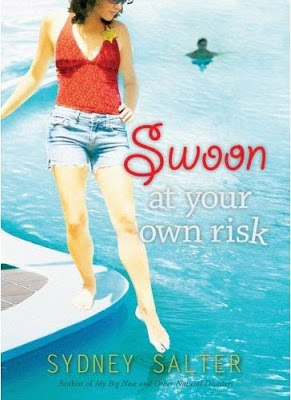 SWOON AT YOUR OWN RISK
Author: Sydney Salter
Source: Purchased

You’d think Polly Martin would have all the answers when it comes to love—after all, her grandmother is the famous syndicated advice columnist Miss Swoon. But after a junior year full of dating disasters, Polly has sworn off boys. This summer, she’s going to focus on herself for once. So Polly is happy when she finds out Grandma is moving in—think of all the great advice she’ll get.

But Miss Swoon turns out to be a man-crazy sexagenarian! How can Polly stop herself from falling for Xander Cooper, the suddenly-hot skateboarder who keeps showing up while she’s working at Wild Waves water park, when Grandma is picking up guys at the bookstore and flirting with the dishwasher repairman?

No advice column can prepare Polly for what happens when she goes on a group camping trip with three too many ex-boyfriends and the tempting Xander. Polly is forced to face her feelings and figure out if she can be in love—and still be herself.

I tried really hard to enjoy this book.  The summary sounded fun and swoon worthy, but to me the story fell flat.  With too many characters, too much whining, and not enough substantial plot, I felt the book was lacking what it was implying in the summary.

I hated how Polly was constantly whining and how stuck up she could be at times.  I couldn’t warm up to her personality at all.  Xander was in the picture but when he was, he hardly got to speak as much as I wanted.  The little Dear Miss Swoon columns at the end of each chapter were annoying as well. Sometimes they had nothing to do with either the chapter we just finished or the one that follows it.

While the writing was good with great structure and flow, the story itself was bland and forced.  Would I read another book by this author? Of course I would.  Her writing does have great points about it, but this one lacked the feel that I was craving at the moment.  Not a bad book, but not one I would reread.