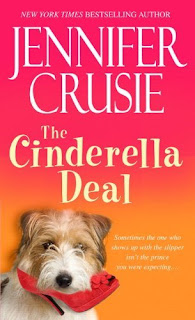 THE CINDERELLA DEAL
Author: Jennifer Crusie
Source: Purchased at the store
SYNOPSIS:
Daisy Flattery is a free spirit with a soft spot for strays and a weakness for a good story. Why else would she agree to the outrageous charade offered by her buttoned-down workaholic neighbor, Linc Blaise? The history professor needs to have a fiancée in order to capture his dream job, and Daisy is game to play the role. But something funny happens on their way to the altar that changes everything. Now, with the midnight hour approaching, will Daisy lose her prince, or will opposites not only attract but live happily ever after?
MY THOUGHTS:
Who wouldn’t want to be Cinderella? Well, I mean the good part of Cinderella’s fairy tale.  Daisy is so quirky and the complete opposite of Linc.  Don’t they say opposites attract? Well, in this fun and light romance, the author gives you humor, romance, and witty writing that is a fairy tale of modern days.
Linc needs a fiance to seal a deal for a job.  Daisy needs the cash. What they don’t realize is that they need eachother! I loved the bickering between the two and I loved the romance.  At times I wanted to reach into the book and slap the crap out of Linc, but Daisy does a good job of setting him straight.
This book reminded me not only of Cinderella, but of the movie Pretty Woman as well. I will say that Daisy has a soft spot for animals and I love how the author describes these animals that she rescues.  We have a cat that might has well be dead, because he lays around and plays dead all the time.  We have a kitten she finds that she names Little Orphan Annie. Then we throw in a dog that has a broken tail, leg and one missing eye! I especially love the line where Linc sings to the dog:
“Daisy Blaise had a real dumb dog, and Jupiter was his name/Oh, Ju-Ju-Ju-pi-ter/Ju-Ju-Ju-pi-ter/Ju-Ju-Ju-pi-ter/And Jupiter was his name, oh.”
A great and light read for any day of the week to lift your spirits!
MY RATING:

4 Responses to “THE CINDERELLA DEAL by Jennifer Crusie”