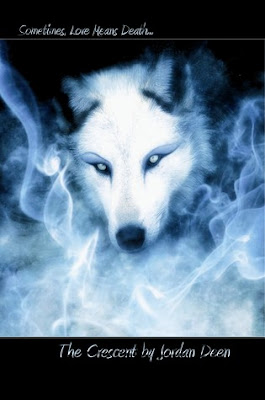 Becoming a werewolf is not an option for seventeen-year-old Lacey Quinn, but death can be a strong motivator.

Lacey is so focused on her future that everyday life has passed her by. Counting down the days to her eighteenth birthday, Lacey is almost home free. But when she falls for the mysterious Alex Morris, she lands in the middle of an ancient war between two enemy wolf packs. Tempting dreams, tantalizing lies and a dangerous love triangle ensues leaving Lacey heartbroken and confused.

Lacey’s fate rests in the hands of Alex and Brandon, but both are pulling her strings for their own agendas. Even as she slips further into the dark world of werewolves, Lacey struggles to find the truth and save the only family she’s ever know.

I really enjoyed this story from author Jordan Deen.  It has the werewolf factor that is hot and in demand right now, plus it has a love triangle with two gorgeous guys in love with the girl.

While there were parts of the story that dragged and characters that had flaws, I still enjoyed the journey that the author takes you in in the book.  I was a little disappointed in the fact that Brandon, Lacey’s true soul mate, was only around for a few pages within the first 3/4 of the book.  I wanted to cheer for them, but it is hard when you don’t get to see the characters interact throughout the entire story.

This leads me to Alex.  Alex is there from the beginning.  He is loving and attentive towards Lacey.  He tries hard to be the boyfriend she thinks she needs.  Plus, he is one of the most gorgeous boys in school which makes the popular girls green with envy.  I found myself cheering that Alex would be the one she chose mainly because I established a connection with him since he was around more in the story.

Lacey was a little hesitant in the love department with Alex.  She was indecisive and couldn’t make up her mind about the boys.  While I understand that she was torn between two loves, she seemed to flip flop between the two way too much.


The author saved the action for the last 1/4 of the book which made for a climatic ending.  In a way, I wish there would have been more action and suspense throughout the entire book, but I can also see how the author wanted to build the characters and relationships first.  The action scenes were a little choppy and inconsistent, but I was willing to overlook that fact mainly because of the revelation of who Grant is and the redeeming of certain characters in the book.


A great read to introduce to young readers and adults who are just getting their toes wet in the paranormal genre, and a series that has me eagerly anticipating the next book in the series!