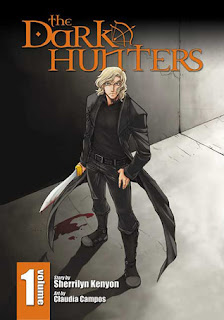 In the war against vampires, mankind has only one hope: The Dark-Hunters. Ancient warriors who died of brutal betrayal, the Dark-Hunters have sworn themselves into the service of the goddess Artemis to protect us.

It’s a pact with pretty good perks. Immortality, power, psychic abilities, wealth and a cool wardrobe. But it comes with a few drawbacks: fatal sun poisoning and a new, irreparable dental problem. But aside from the fangs and nocturnal lifestyle, it’s not so bad.  Until Kyrian meets the most frightening thing imaginable. An accountant who’s being hunted by one of the most lethal vampires out there. If Amanda Devereaux goes down, so does he and no offense, he doesn’t want to die (hence the whole immortality thing). And he doesn’t want humanity dead either which is a good thing for us since he and Amanda are all that stands between us and oblivion. Let’s hope they win.

From the wild imagination of Sherrilyn Kenyon comes the humorous and suspenseful manga debut of the #1 internationally bestselling Dark-Hunter series. The world of manga will never be the same again.


Let me say that I am in no way a huge Manga fan.  My daughter reads Manga and she is constantly trying to get me to try them.  I on the other hand, would rather have a book rich in words than a book rich in illustrations.  Call it the bookworm in me, but books are made to be read, not to enjoy an illustration with dialogue like a comic book.  So after constant nagging from my daughter, I caved into to reading a Manga novel.  I did have one requirement — it has to be a Manga based on a book by an author I know.  So decided to start my Manga journey with The Dark-Hunters series by Sherrilyn Kenyon.


While I wasn’t a big fan of the illustration — due to the fact that Kyrian looked too girlish —the writing was actually great.  Granted, author Sherrilyn Kenyon edited this book and it was from her voice, so it made it a better experience than what it would have been if done by just any Manga author I think.  I loved the witty dialogue throughout the Manga that was true to the authors voice.  I actually read it so fast that the book was devoured within an hour.


If you are worried about reading Manga, I suggest that you do the same thing I did and read a Manga book from an author you love already.  Consider it an easier transition into the world of illustrated and comic book feel of books.