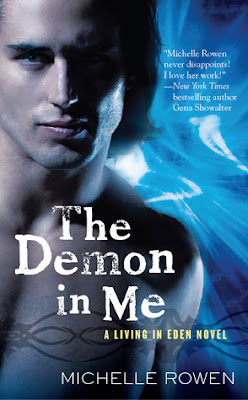 THE DEMON IN ME
A Living in Eden Novel #1
Author: Michelle Rowen
Source: Purchased

Fate has led Eden Riley to become a “psychic consultant” to the police, even though her abilities are unreliable at best. Those paranormal powers are about to get her into a jam she couldn’t have predicted: After her hunky police detective partner guns down a serial killer in front of her, Eden realizes that she’s quite literally no longer alone. A voice in her head introduces himself as Darrak. He’s a demon. But not in a bad way!

Darrak lost his original body three hundred years ago, thanks to a witch’s curse. This is the first time he’s been able to speak directly to a host, plus there’s a bonus: Eden’s psychic energy helps him to take form during daylight hours. He wants to use this chance to find a way to break his curse – finally. Otherwise, Eden’s going to have to learn to live with this sexy demon … like it or not.

After falling in love with the author’s other books, I was excited to start another series by her.  Michelle Rowen always has the ability to create a new world with witty humor, fun characters and all at a great pace to keep me interested from beginning to end.  With this series, we meet Eden Riley.  Eden has a small touch of psychic in her that she has been using to help the police in unsolved cases.  In her first case with the police, she failed them.  Now as she tries again with the next case, she find herself working with a skeptical detective named Ben who happens to be a “Ken Doll” looking model.  To say she has a crush on him is putting it mildly.  When they enter a serial killers home to uncover clues, Eden finds herself face to face with the killer.  After Ben shoots the killer, Eden is overcome with black smoke that only she can see and quickly finds out that it was a cursed Demon that has now taken up residence in her body.

Eden is the only one that can hear Darrak since he is literally living inside her body. After centuries of not being able to communicate with his hosts, Darrak is excited to finally have someone who can help him break a Black Witches curse that condemned this archdemon to his current predicament.  Since Eden is part psychic, Darrak can also take human form outside of her body during the daylight hours.

The author did not disappoint with the fun and witty dialogue with this series.  Darrak was sexy, funny and oh so bad but in a good way.  You couldn’t help but feel the same way Eden does toward the demon.  She goes through shock, disbelief and eventually trust and love with the demon.

With a fun plot, sexy demon and a psychic who is as skeptical as a non believer can be, this book will take you on a roller coaster of laughter, suspense and all out fun.  Darrak is a demon who could posses me anytime and take up permanent residence in my body! A well done beginning novel to a series that is sure to be a hit and one I look forward to reading the rest of!