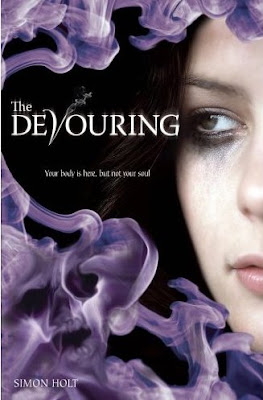 When Reggie finds an old journal and reads about the Vours, supernatural creatures who feast on fear and attack on the eve of the winter solstice, she assumes they are just the musings of some lunatic author. But soon, they become a terrifying reality when she begins to suspect that her timid younger brother might be one of their victims.

Risking her life and her sanity, Reggie enters a living nightmare to save the people she loves. Can she devour own her fears before they devour her?

Bone-chilling, terrifying, thrilling…what are you waiting for?

When Reggie finds a journal at the book store she works at, she brings it home and starts a bone-chilling and true to life story that you would expect to see in movies.  She reads about Vours who devour your fears and bring them to life on Sorry Night.  She is into scary movies and her best friend Aaron is quite the movie buff as well.  Reggie’s mother left her, her brother Henry, and her father a few years ago.  The hurt of her leaving never faded with Henry, even though Reggie has tried to fill in as a mother to him instead of a sister.  When Sorry Night approaches, Reggie makes the mistake of reading part of the tale to Henry as a bed time story.  Little did they know, the Vours were more than just a story.

Reggie figures out that the Vours have come and taken Henry to Fearscape.  What she doesn’t know is how to get Henry back.  With Aaron helping and her boss Eben holding mysterious secrets, Reggie tries to confront the Vours and bring Henry back to the real world.

This was a perfect read for this time of year. With Halloween approaching, I loved sitting down with this fear gripping read.  I admit that at times it felt like a B-Rated horror flick, but the idea of Vour’s alone were chilling and heart racing.  The book was full of action, even if it stumbled at times, and the devotion that Reggie has for saving her brother was strong.

The ending left a bunch of open story, but this is only the first book in the series.  It left us still wondering about how Eben knew things at times, and also what he wasn’t sharing was left a mystery.  Since the book didn’t have closure at the end, I wouldn’t recommend getting your hopes up for a happily ever after.  Still, it makes me want to read the next book in the series as soon as I can to find out what did happen and see what other secrets will unfold!

“When dark creeps in and eats the light,
Bury your fears on Sorry Night.
For in the winter’s blackest hours,
Comes the feasting of the Vours,
No one can see it, the life they stole,
Your body’s here but not your soul…”

2 Responses to “THE DEVOURING by Simon Holt”