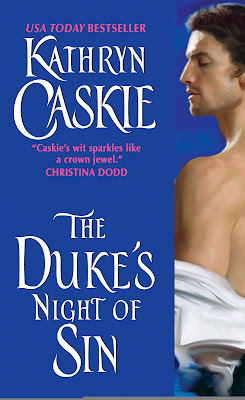 THE DUKE’S NIGHT OF SIN
Author: Kathryn Caskie
Source: Publisher
*I received this book free of charge in exchange for an honest review*

The “Seven Deadly Sins” lived for scandal and delighted in disgrace, but now they must repent—in marriage!
A sin he cannot forget

The Duke of Exeter knows it’s time to find a bride, and he’s determined to locate the passionate minx who enticed him in a pitch-black library. But how can you find someone you’ve never really seen? Then, while supervising his young ward’s education, he is irresistibly attracted to her exquisite new teacher. He keeps wondering if they’ve met somewhere before, never suspecting she’s the woman he’s never forgotten after his one night of sin.

As a beloved instructress at an exclusive school for young ladies, Lady Siusan Sinclair is a model of deportment. But no one knows her secret—that she fled London for Bath, her reputation on the verge of tatters, her fortune lost. Still, no matter how hard she tries, she can’t forget the knee-weakening kiss of the man who led her astray . . .

First of all that let me say that the cover was not that appealing.  Sure it had a gorgeous man on the front, but the wow factor of the cover comes when you open the flap of the cover and get the whole picture instead.  Yes, I am a fan of covers just as much as books because they are what can capture a readers interest in deciding what will get picked up off the shelf first.

With that being said, the story was great.  It is the third book in the “Seven Deadly Sins” series. and in my opinion one of the better of the three.  The writing was better, the story was better, and the characters were even more enjoyable than the previous two books.  This book pushed the envelope with steamier scenes and bolder characters that pushed this series in a better direction.  Even though the ending was a little out there for one of the two main characters, I still found it to be an enjoyable read with the perfect balance of romance, sexy and plot.

A great new book in a series that will leave readers wanting to cast their own sins once they finish the book.