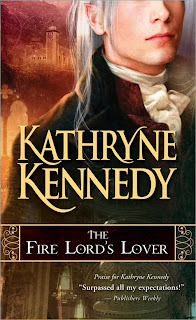 THE FIRE LORD’S LOVER
Author: Kathryne Kennedy
Source: Publisher
*I received this book free of charge in exchange for an honest review*


If his powers are discovered, his father will destroy him…
In a magical land ruled by ruthless Elven lords, the Fire Lord’s son Dominic Raikes plays a deadly game to conceal his growing might from his malevolent father-until his arranged bride awakens in him passions he thought he had buried forever…

Unless his fiancée kills him first…
Lady Cassandra has been raised in outward purity and innocence, while secretly being trained as an assassin. Her mission is to bring down the Elven Lord and his champion son. But when she gets to court she discovers that nothing is what it seems, least of all the man she married…
Then Dominic and Cassandra together uncover an unspeakable evil, one that threatens the destruction of the magical realm they would give their souls to save…

I haven’t read too many books involving elves, unless you want to count the ElfQuest comics and books.  So I thought I would give this one a try.

This is book one in a series by author Kathryne Kennedy. She is a new to me author as well.   I loved the characters that the author introduced us to. Cassandra was easy to like, but Dominic wasn’t. He was cold  and closed off.  Yet, even with these characteristics, the author was able to portray him as a character that would grow on me. The author involved fantasy and historical romance that you don’t see too often.  She combined the two genre’s and pulled it off wonderfully.

This book left me wanting more.  I found a new series that has captivated me from a new author that has a new fan! I can’t wait to read the next book in the series!

One Response to “The Fire Lord’s Lover by Kathryne Kennedy”