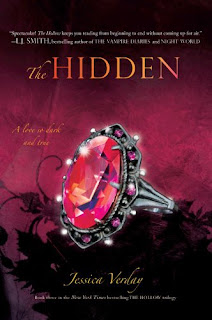 THE HIDDEN
The Hollow #3
Author: Jessica Verday
Source: Publisher
*I received this book free of charge in exchange for an honest review*

A love that knows no bounds.

Abbey knows that Caspian is her destiny. Theirs is a bond that transcends even death. But as Abbey finally learns the full truth about the dark fate that links her to Caspian and ties them both to the town of Sleepy Hollow, she suddenly has some very hard choices to make. Caspian may be the love of her life, but is that love worth dying for?


I have been following the mysterious journey of Caspian and Abbey since the beginning book called The Hollow.  I was sucked into the legend of Sleepy Hollow and the beautiful romance between the characters.  The Hidden is the third and final book in The Hollow trilogy, and the author let it end with a bang.


I will start off by saying that if you haven’t read the previous books in the series, you will have a hard time understanding what is going on this book.  You will also be confused at the basic plot and who all the characters are.  For this reason, this is not a stand alone novel.  You really need to read the whole series to understand how Caspian and Abbey have made it to this final chapter.  I found myself having to read the previous book before I even attempted to read this one.  I needed a refresher course on their story to be able to remember what has happened previously.


In The Hidden, secrets will be revealed along with the mysterious death of Kristen.  The reader finally gets closure and answers involving Kristen’s death, her relationship with Vincent, what Vincent really wants, and the future that can be involving Caspian.  Favorite characters are returned to the fold and make an appearance for the the conclusion as well.  The author even gave the reader an unexpected epilogue that finalized the story for the reader.


If I had to pick one problem with this story, it would be the fact that I have mentioned before in this series.  It moves slowly throughout the book until you reach the ending.  Finally, when the ending was approaching,  it picked up its pace and was great.  I am saddened by the thought that I am finished with this series because I loved Caspian and Abbey so much.  Yet, as they say, all good things must come to an end.  Trust me when I say that it is an ending worth the time of reading about!