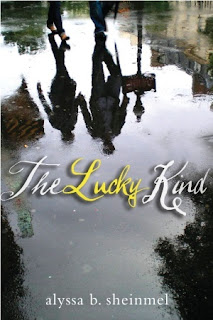 High school junior Nick Brandt is intent on getting a girlfriend, and Eden Reiss is the one that he wants. He has exactly four semesters to get the girl, but when the phone rings on an otherwise ordinary Tuesday night, life for Nick and his parents will never be the same. What had been a seemingly idyllic home life has become something else entirely. But with this shake-up comes a newfound confidence for Nick; he’s become a bolder version of himself, no longer afraid to question his parents, and no longer afraid to talk to Eden.

I wasn’t sure what to think going into this book.  I had heard mixed reviews on it, but I still didn’t know much about it.  It wasn’t a greatly hyped up book, which I think is what caught my attention when I saw it.  I thought that if there isn’t much talk about the book, then maybe I could enjoy it without getting my hopes to high.
It focus’ on adoption and the turmoil the secrets of adoption can cause in a family.  It also touches on the subject of how a boy could finally get the nerve to talk to a girl he has been crushing on and how it might have been the family circumstance’s that finally give him the push he needed to do it.


While the writing was just okay, and the characters weren’t as great as I was hoping, it was a fairly quick read.  I did enjoy how it is from a boys perspective instead of a female for a change.  Nick was a character that I though was okay, but at times I thought he could have been much more.  His mind kind of wandered too much for me.  He would be focused on Eden and then he would switch gears and think about Sam.  He seemed to be pushy for answers as well when speaking with his Father.  I can understand the curiosity of adoption and the history behind what happened, but I felt that he should have just asked his Father to explain things all in one conversation.  I didn’t like how he would just change subjects at whim and throw a question out there at his Father.  I also would have liked to have seen more of his Mother involved in the discussions and her feelings on the history.


The book had a believable plot, but the ending was lacking in closure as well.  It is left open ended in a way for you to come to your own conclusions for the story.  Personally, I like my books to have closure at the end.  If I spend my time reading a book, I want to know that the author had an ending in mind that would finish it up.  When the final chapter is left like that, I get the feeling that the author didn’t feel like completing the story and just gave up.


Overall if you are a big fan of touchy subjects that involve the family, then give it a try.  Personally, it is not one I would read again in the future.