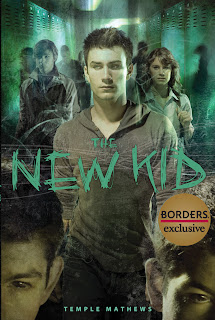 Will Hunter is used to being the New Kid; Harrisburg High School is his fifth new school in less than three years. By now, he knows not to be fooled by the bright pep rallies, the wholesome jocks, the innocent cheerleaders. He knows the evil lurking underneath. It’s the same evil that took his dad eight years ago: the same evil he battles every day.

Natalie Holand’s life fell apart the night her sister Emily disappeared. No one believes her when she tells them what she saw: yellow and green eyes, glowing beneath the surface of the water in which Emily supposedly drowned. And Emily isn’t the only person to go missing in Harrisburg lately. The town is changing, not for the better, and Natalie doesn’t know why. What she does know is that, whatever’s happening, it’s bad, and the New Kid is right in the middle of it.

Because Will’s got a secret even bigger than Harrisburg’s . . . and there’s more to it than even he knows.

The New Kid: Ridding the world of evil, one high school at a time.

My mom found this at Borders awhile back in the discount bin. Boy am I glad she found it! Amazing how so many discount books there are when they are such awesome reads! This was a great read and left me wanting another book in this series! It is full of action, surprises, and paranormal! This great young adult book is even great for the adults to read. In my opinion this book was well worth the money!

2 Responses to “THE NEW KID by Temple Mathews”