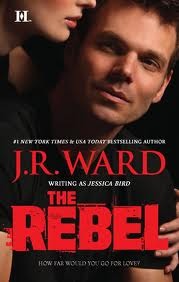 Nate Walker has never shied away from the hard road. Even when it meant leaving behind his family, wealth, and the fiance who only wanted a rich man. Nothing was going to stop him from opening his own five-star restaurant.
And he was on his way until his car broke down on a dark road in the Adirondacks, leading him right to White Caps Inn and Frankie Moorehouse.


Suddenly Nate has a job he doesn’t really need and an affair that has to end when summer does. Except Frankie has a way about her. She gets under his skin. She even makes him want to do what he never thought he could stay forever.

The Rebel is the fist book in The Moorehouse Legacy series by author Jessica Bird — also known as J.R. Ward.  Instead of paranormal romance, the author ventures into contemporary romance with The Rebel.

While the books summary held promise, I felt that the book was just okay.  It was predictable and at times a little boring.  I felt there were some parts of the book that could have moved a little faster while some parts should have slowed down.  The ending especially was very rushed.  Everything gets solved and the characters get a happily ever after within a matter of pages.

I liked the side story of how Frankie and Joy had to take care of their Grandmother who has dementia.  The character of George had a mental disability, but the author showed a reader how they can work if given patience.  I think those two story points made this book better.

While I loved the character of Nate,  I wasn’t a big fan of Frankie.  She was rude, pushy, and stand-offish.  The author made her character a little too strong and with too much of a backbone.  It made her unlovable in my eyes and I just couldn’t seem to connect with her.

This was a quick read and the sex was tamed down quite a bit.  It didn’t get too graphic unlike other romance books.  It was glossed over and wasn’t taking up pages of the story.  I will definitely try the next book in the series because I am curious to know what happens to the other characters.  Great for a quick fix until you get to your next book.