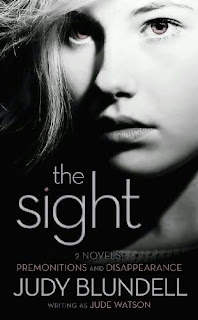 THE SIGHT
Author: Jude Watson
Source: Library
SYNOPSIS:
Gracie has premonitions. They’ve haunted her since before her mother’s death, and she can’t get rid of them. She doesn’t know how to deal with them and she doesn’t want to–they’ve never led to anything good. She never knows whether she’s seeing the past, the present, or the future–it just comes to her. But Gracie is forced to try to use her premonitions. Her best friend, Emily, disappears, and the premonitions lead to the only clues to where she might be–and how she might be saved. Gracie’s long-absent father reappears, and his history appears to be mysteriously linked to the disappearance of a student many years ago–and the recent appearance of a body. Only Gracie’s premonitions lead to answers to some dark family secrets. In these two novels, Judy Blundell (writing as Jude Watson) takes readers on a suspenseful journey where premonitions become a matter of life and death.
MY THOUGHTS:
First of all, this is two books in one.  The first book is Premonitions and the second is Disappearance.  While I liked the idea of the book, the story was not that great.  Gracie has premonitions that she hates.  She just wants to be normal.  Along with this gift, she can also see the past and can feel what other people are feeling.  While most people would consider this a gift, Gracie thinks it is curse.
What I didn’t like about the book is at first, the girl that goes missing, Emily, is not what you would consider Gracie’s best friend.  Emily just latched on to Gracie, and Gracie can’t stand her.  So when Emily goes missing, her about face of being so concerned for Emily is far fetched.  Gracie wanted her to go away and now she is playing private eye to find her.  For the suspense, it had a bunch of it.  The only thing is that you know who did it almost without even thinking about it.
The only saving grace of this book were the side characters.  I felt more of a connection with them than I did with Gracie. The cover was great for the paranormal feel of the book.  The black and white with colored eyes has a little mystery to it.  Overall a book that I wouldn’t waste my money on buying.  If it is something you still want to read, I recommend checking it out from the library first before spending your money on it.
MY RATING: