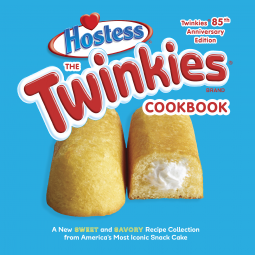 The sugar filled (and cream filled) cakes we would scream with joy to see packed in our lunchbox growing up. The dessert was one that children would trade anything in their lunch for in the cafeteria. Then came the scare of Twinkies never being around again. Thankfully they are back on the shelves and now Hostess is celebrating with an 85th anniversary Edition cookbook for Twinkie lovers.

Looking through the photos and the names of the recipes, I admit to drooling and craving a Twinkie. I might have ate one or two (or three) while also devouring the pages of this cookbook.  I learned new ways to include the Twinkie in several dessert dishes  I wouldn’t have really thought about. A few of the recipes were generic and with not much thought really, but it is including Twinkies! How are they suppose to improve on something that is already perfect?

There were a few flaws with the electronic version I received. The recipes were split up weird with half the recipe on one page, and the rest on the next. Pictures were also cut in half and split up the same way.  In my opinion, this would be better as a print book than as an electronic edition.