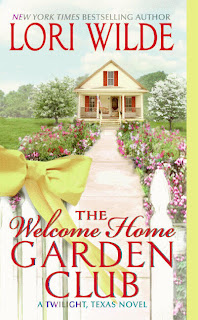 Traditional meaning of Pink and White Roses: I love you still and always will.

Caitlyn Marsh stopped believing in happily-ever-after when high-school sweetheart, Gideon Garza, left for Iraq. Now she raises her small son while her matchmaking gardening club members drive her crazy. Then Caitlyn’s world turns upside-down when Gideon swaggers back to Twilight.

Gideon had left town in the middle of night with threats ringing in his ears. A lot of things have changed since then. This bad boy-turned-Green Beret bears scars from the war, the timid girl he loved is an independent mother, and the father who refused to recognize his son in life has, in death, left him a vast cattle ranch.

He still aches for Caitlyn, and now there’s a dark-haired boy who looks exactly like Gideon did at that age. Could the child be his? And can this war-weary soldier overcome the scars of the past to claim the family he so richly deserves?

I am in love with this author and her novels!  I always love the people of Twilight, Texas that she introduces me to with each new installment of the series.  Not only does she bring new romance with each book, but she also does my favorite thing and bring back characters from the previous books!  I love when an author reminds the reader of previous books in the series by integrating them into the current read.


With this book, we meet Caitlyn Marsh who owns the florist shop in town.  After having a whirlwind romance as a teenager with Gideon Garza, she discovers that she is pregnant and hires a detective to locate him after he enlists in the army after a run in with the law.  The detective informs her that he died in service and she finds herself devastated.  What she doesn’t know is that someone paid off the detective back then and made him lie about Gideon being dead.  Caitlyn moves on with her life and marries the local florist in town.  Her son is given a name, but everyone in town knows the truth of who the father really is.


Gideon was the result of an affair between one of the richest men in town and the hired help.  His true father refuses to acknowledge him when Gideon confronts him with the paternity issue and it angers him to the point that he burns the rich mans barn to the ground.  Caitlyn’s father, who happens to be the judge in town, offers him the ultimatum of jail time or army time.  While Gideon chooses the army, he never expected to lose not only the love of his life, but also his hand in a bombing.


When Gideon’s father passes away, he is shocked to learn that he has just inherited the ranch and the bulk of his monetary estate.  Add to this the anger from two half brothers still coping with the death of their father, and you can guarantee there is going to be some turmoil and revenge.  Now Gideon must return to Twilight and figure out if he wants to accept the money and ranch, or stay away from the love of his life for good.  Upon returning to Twilight, Gideon finds out he is a Father and is shocked at the lengths that people took to keep Caitlyn out of his life.  When they both discover the truth though, their romance blossoms again and second chances are given.


While I enjoyed this story, it is not one of my favorites of the series.  I enjoyed the writing and the characters discovery of second chances, but I wish the author would have give us a chapter or two of the couple as a teenagers first before starting the current time frame.  I think if I would have read how the interacted as teens, I would have enjoyed their story more and could have understood how much they each suffered over the years.


Other than that one point above, the book was a great new addition to the series.  I still wish I could find myself in the fictional town of  Twilight, Texas and enjoy each character on a daily basis.  A sweet romance to satisfy that sweet tooth when we want a true romance book to read.