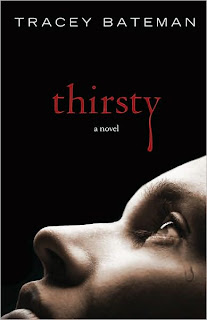 THIRSTY: A NOVEL
Author: Tracey Bateman
Source: WaterBrook Multnomah
*I received this book free of charge in exchange for an honest review*

SYNOPSIS:
There’s no place like home, they say.
“Hello, I’m Nina Parker…and I’m an alcoholic.” For Nina, it’s not the weighty admission but the first steps toward recovery that prove most difficult. She must face her ex-husband, Hunt, with little hope of making amends, and try to rebuild a relationship with her angry teenage daughter, Meagan. Hardest of all, she is forced to return to Abbey Hills, Missouri, the hometown she abruptly abandoned nearly two decades earlier–and her unexpected arrival in the sleepy Ozark town catches the attention of someone–or something–igniting a two-hundred-fifty-year-old desire that rages like a wildfire. Unaware of the darkness stalking her, Nina is confronted with a series of events that threaten to unhinge her sobriety. Her daughter wants to spend time with the parents Nina left behind. A terrifying event that has haunted Nina for almost twenty years begins to surface. And an alluring neighbor initiates an unusual friendship with Nina, but is Markus truly a kindred spirit or a man guarding dangerous secrets? As everything she loves hangs in the balance, will Nina’s feeble grasp on her demons be broken, leaving her powerless against the thirst? The battle between redemption and obsession unfold to its startling, unforgettable end.

Thirsty is a vampire read but from the Christian perspective. It involves substance abuse and how it can wreck a family, but with love it can come out better in the long run. I found myself wrapped up in Nina’s struggle and makes you realize that it can happen to anyone, even someone you love. Even though it is in the Religious section, you don’t get the impression of a sermon while reading it. It was well balanced and a captivating read. This was suspenseful and intense, but if you have a teen struggling with substance abuse, I still think they could benefit from this read. Don’t expect the Twilight or True Blood aspect of the vampire world when you read this book. Yes, it is about a vampires, but it is also about religion and substance abuse.
MY RATING:

One Response to “THIRSTY by Tracey Bateman (blog tour)”