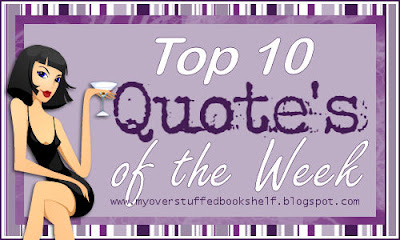 Top Ten Quote’s of the Week
(Inspired by Smexybooks Top Ten Friday)
(This will be a Friday meme, but I will be out of town this Friday)
Top Ten Quote’s of the Week is where I have looked around the quote section on Goodreads while searching for books.  Each week I will share with you ten quote’s I have found that I added to my favorites list on Goodreads. Enjoy the new Meme and if you would like to join in, leave a link to your post in the comments.
—————————————
1. Vampires Are Forever by Lynsay Sands
“Have you tried to talk to her?”
“What would you like me to say Bastian? OH, I’M SORRY, INEZ. I DIDN’T MEAN TO BITE YOU, MY FANGS SLIPPED.”
2. Oh My Goth by Gena Showalter
“There’s a really stupid saying: When life hands you a lemon, make lemonade. Well, I have a better saying: When life hands you a lemon, shove that lemon up its stupid butt.”
3. Feast of Fools by Rachel Caine
“I’m gonna kill him,” Eve said, or at least that was what it sounded like filtered through the pillow.
“Stake him right in the heart, shove garlic up his ass, and-and-“
“And what?” (Michael)
“When did you get home?” Claire demanded.
“Apparently just in time to hear my funeral plans. I especially like the garlic up the ass. It’s…different.”
4. You Slay Me by Katie MacAlister
“What do you know about dragons?”
“They’re big, scaly, four-legged creatures with wings who terrorized small villages until a virgin was offered up as a sacrifice.”
His grinned again. “I do miss the virgins.”
5. Lover Avenged by J.R. Ward
The staircase that was revealed was lit with a soft red glow.
“I feel like I’m walking down into a porn movie,” V muttered as they took the steps with care.
“Wouldn’t that require more black candles for you,” Zsadist cracked.
At the bottom of the landing, they looked left and right down a corridor carved out of stone, seeing row after row of…black candles with ruby color flames.
“I take that back,” Z said, eyeing the display.
“We start hearing chick-a-wow-wow shit,” V cut in, “can I start calling you Z-packed?”
“Not if you want to keep breathing.”
6. Magic Strikes by Ilona Andrews
Curran looked back at me. “Why is it you always attract creeps?”
“You tell me.” Ha! Walked right into that one, yes, he did.”
7. Moon Called by Patricia Briggs
“MS. THOMPSON, it said in heavy block letters, PLEASE KEEP YOUR FELINE OFF MY PROPERTY. IF I SEE IT AGAIN, I WILL EAT IT.”
8. Iced by Karen Marie Moning
“You’re early.”
I give him a mutinous look. Of course he thinks my being early is about him. It’s not. Mac was at Chester’s last night at eight. I think she’s hunting me. Since I can’t be late to avoid her, I have to be early. “Watch broke. Thought I was on time.”
“You don’t wear a watch.”
“See? I knew I had a problem. I’ll just dash out and get one. Be back tomorrow. On time.”
9. Down To You by M. Leighton
“Shawna smiles demurely at the attendant, her lips barely moving as she speaks to me. “If you had a piece of coal, we could hold her down, shove it up her ass and come collect a big fat diamond in a few days.”
“I’m pretty sure it takes longer than a few days for coal to turn into a diamond, Shawna.”
“Not in that tight ass, it wouldn’t.”
10. Nice Girls Don’t Live Forever by Molly Harper
“The two of them shared a look over my head. Gabriel made several threatening faces. Dick responded with rude gestures. Eventually, they looked like two inebriated mimes having a dance off.”