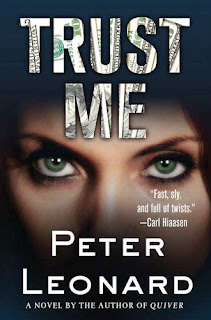 TRUST ME
Author: Peter Leonard
For Review: Thank you to FSB Associates

SYNOPSIS:
The first mistake Karen Delaney made was entrusting $300,000 to her boyfriend, Samir, the head of an illegal bookmaking operation. The second was breaking up with him—because Samir holds a $300,000 grudge. A few months later, Karen sees a way to get her money back when two thieves break into her house in the middle of the night. She proposes a scheme to steal Samir’s safe, but Karen soon realizes she’s in way over her head as things begin to spin out of control. Trust Me moves at breakneck speed through the affluent suburbs of Detroit and Chicago as Karen is pursued by O’Clair, an ex-con/ex-cop who works for Samir and wants the money for his own retirement; by Ricky, Samir’s nephew, who sees the money as a way to pay off his own escalating gambling debts; by the thieves who’ve been double-crossed; and by two ruthless hit men who view the money as their stake in the American dream.
MY TAKE:
As soon as I read the first chapter, I was sucked into a world of suspense and mystery! This book has opened my eyes to another author who can capture the true meaning of writing a suspense filled mystery with ease! Some parts of the book are funny. Just when you think that Karen doesn’t have a brain in her head, she turns around and thinks she can be a genius. Trust Me was a refreshing read and has great plots and twists!

Very Good! You have to read this book!