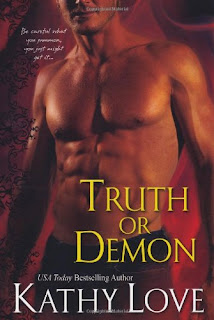 If you ask Killian O’Brien, Hell gets a bad rap. True, he’s a demon, so he’s bound to be a little biased. But he’s got great job security, all the women he can handle, a body to die for–literally–and free reign to do as he likes. Or he did, until teenager Daisy Reed and her two friends got hold of a book of spells and summoned him to do their bidding. Their demand: find Daisy’s older sister, Poppy, a boyfriend. Can’t be that difficult, right? It’s not like the woman is unattractive. Truth be told, Poppy is irresistible–and mind-blowingly sexy. Which is exactly why finishing this simple little assignment so he can be sent back where he came from is turning out to be the hardest thing Killian’s ever done. . .

Poppy has had to grow up fast when her parents die.  She has to take care of her younger sister, Daisy, and pushes her own dreams aside to raise her.  After a bad break-up, she has also given up on ever finding love.  So Daisy decides to take matters into her own hands and summon a Demon to find Poppy’s soul mate.  Little did Daisy and her fellow teen friends know,  Killian O’Brien could be just what they are looking for instead of just a Demon to do their bidding.


I absolutely adored this book!  The characters were fun, amusing and felt real.  Killian was so much more than a Demon in this book.  You almost forget that he is actually a Demon from Hell!  He has charm, when he attempts to use it,  sexiness, and the patience to deal with young teens that believe in true love.  The only problem I had with this book was how naive Poppy was.  She believed everything that the young teens told her without much questioning.


I loved how Poppy had self esteem issues to work through after her previous boyfriend ditched her.  What woman doesn’t feel frumpy and mousy at some point?  While Poppy knows she could never be supermodel gorgeous, she does want someone to love her as is.  At first Killian doesn’t know how he is going to find a soul mate for such a mousy and plain human, but he eventually realizes that there is so much beauty in Poppy that he wants her for himself.  The only problem is Killian is a Demon from Hell with no chance of being with a human.


Personally, I can’t wait for the next book in this series by this author.  I loved everything about this book and who wouldn’t want a man like Killian? Perfect to read as part of the series, but can easily be read as a stand alone book.  Sexy, fun and full of spunk! A great read from a great author!