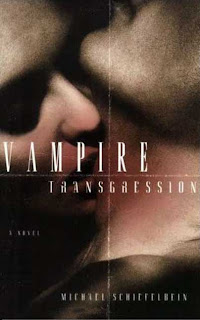 VAMPIRE TRANSGRESSION
Author: Michael Schiefelbein
Source: Library
SYNOPSIS:
Victor Decimus is a 2,000 year old vampire, having last seen the sun when he was a Roman soldier in biblical times. There are few rules that govern a vampire’s existence but those rules are absolute: 1) Vampires are not allowed to associate with other vampires and 2) Once a vampire convinces a human to take his place as a vampire, he must leave the earthly realm for the Dark Kingdom.
Victor, unfortunately, has broken both those rules — he’s sired his human lover Paul as a vampire and stayed with him on Earth. The two enjoy an intense life as lovers, living in Georgetown and mingling at their private club for devotees, a converted church now known as Dies Irae. But their transgression is not taken lightly and agents for the Dark Realm are now on the prowl, looking to enforce their will and, if necessary, threaten everything that Victor and Paul hold dear, even each other, to punish their transgression.
MY THOUGHTS:
I was looking for a book to fit in one of my challenges, and I came across this book at the library.  Not only did it fit into a few of the challenges I am signed up for, but it touched on different subjects at the same time.
We have vampires, male/male romance, BDSM, and a dark and rich plot.  This is the third book in the series by this author, but the first I have read by him.  I will say that this book did not serve well as a stand alone book.  I was a little lost for about half the book.  The ending ended rather abrubtly as well.  I really liked the authors take on everything.  It was well written, and the characters were wonderful.  I liked the suspense and the love you could feel from both characters when they are together.
Overall not a bad read, especially if you have followed the series and can stand to read this sort of writing.  Not as steamy as I thought it was going to be, but it worked with the plot of the book.
MY RATING:

Perfect For Rainy Days From the Library!