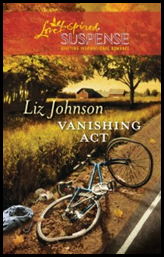 VANISHING ACT
Author: Liz Johnson
Source: Author Submission–Thank you!
*I received this book free of charge in exchange for an honest review*

Eighteen months ago, Nora James watched as her father was shot in an alley—and then she fl ed. She changed her name, her appearance and her job, hoping to keep her father’s shooter at bay. For months, it worked…but now her luck has run out. A ruthless assassin is on her trail, and soon Nora, now known as Danielle, will be found. But this time, she has FBI agent Nate Andersen by her side—right? The handsome agent would give his life to protect Danielle, but he’s wary of giving his heart…until a deadly confrontation leaves him with both on the line.

I was so excited to be contacted by the author to review this book.  I had been looking for an Inspirational read to experience stepping out of my normal reads of paranormal and romance.  I was genuinely surprised to find out that just because it is inspirational based, doesn’t mean it can’t have romance and intrigue.

This book had suspense and intrigue involved through Nora.  She changes her name after she sees her Father shot by a bad and dangerous man.  She is not only running from him, but from the FBI as well.  She is found by FBI agent Nate and has changed her name to Danielle.

Both characters were Christian people who attended church, so it holds true to a Love Inspired Steeple Hill book.  After all the romance and erotica books that I read, this was a wonderful romance to read without all the steamy involved.  It was sweet romance that still held its own against the erotica romance I am used to.

The story is a quick read, but one you should read slowly to enjoy the suspense and pure romantic feel the author has brought to it.  A wonderfully written book for this first time reader of Love Inspired Suspense.

One Response to “Vanishing Act by Liz Johnson”