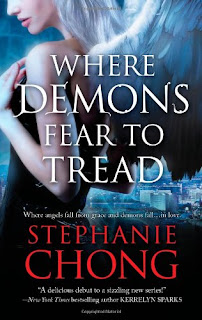 WHERE DEMONS FEAR TO TREAD
The Company of Angels #1
Author: Stephanie Chong
Source: Planned TV Arts
*I received this book free of charge in exchange for an honest review*

Fledging guardian angel and yoga teacher Serena St. Clair dares enter Devil’s Paradise nightclub on a mission—to retrieve the wayward Hollywood “It Boy” she’s assigned to protect. But she’s ambushed by the club’s owner, arch demon Julian Ascher. The most powerful demonic entity in Los Angeles, Julian is handsome as sin, a master of temptation who loves nothing more than corrupting pleasure–seeking humans. He won’t release the lost soul Serena is supposed to guard. Unless she accepts his dangerous wager…

After the disastrous way his human life ended, Julian vowed that no woman would get the better of him again. Yet this sexy–sweet angel, smelling of fresh ocean air and happiness, triggers centuries–old feelings. Now, their high–stakes game of seduction, where angels fall from grace and where demons fear to tread, will lead them either to an eternity in hell.or a deliciously hot heaven.

Humans, Angels and Demons…OH MY!  Ever wonder what Guardian Angels are and who they might be?  In Where Demons Fear to Tread by author Stephanie Chong, we get these questions answered and more.  We learn about the Demons and their way of capturing souls while the Guardian Angels are trying their best to keep the humans on the right track.  When Archdemon Julian Ascher notices Guardian Angel Serena St. Clair in his club, he immediately wants to know more about her.  Not only is she innocent and sexy, she happens to be an Angel who is on his turf.  When the two meet and strike a bargain, it is a fight for the soul of an innocent man named Nick Ramirez.

Usually, I don’t have much luck with books involving Angels.  They either work or they don’t.  In the case of this book, putting an Angel and an Archdemon together made this story sexy, intriguing and climatic. As Serena starts to piece together the puzzle her boss has handed down to her involving Julian, she also starts to fall in love for the bad guy.  Falling for a demon is not allowed, but she can’t help the feelings she is experiencing for Julian.  Of course, Julian is feeling the same and they both put up a good fight in not succumbing to their passion.  What they both don’t know is that a Demon can be rehabilitated and can have his soul returned to good.  Can Serena help him discover and accept this?

I really enjoyed this book.  I loved the dynamics between the two characters and the ease of writing the author used for the reader.  It flowed wonderfully and you could feel the chemistry between the two on each page.  While I wasn’t a big fan of Nick in the book, mainly because he was spoiled and pushy, I liked how his character was the basis in the relationship of Serena and Julian.  Without Nick, they never would have met.

If you are looking for a new author to read, and love the supernatural of Angels and Demons with romance thrown in, then Stephanie Chong is the author for you.  You will be swept away in adventure, passion and redemption.  A new author for me to keep an eye on.