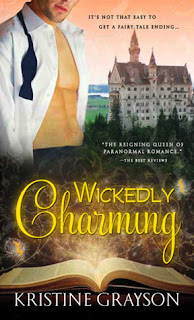 WICKEDLY CHARMING
Author: Kristine Grayson
Source: Publisher
*I received this book free of charge in exchange for an honest review*

Cinderella’s Prince Charming is divorced and at a dead-end in his career, so he opens a bookstore and travels the land ordering books and discovering new authors. Still handsome and still charming, he has given up on women, royalty, and anything that smacks of a future.

Mellie is sick and tired of being called the Evil Stepmother. She did her best by her stepdaughter Snow White, but the girl resented her to no end and made all kinds of false accusations.

I am a huge fan of fairy tale remakes and was excited to jump into the story of Prince Charming and The Evil Stepmother.  Who would think that Cinderella would get rid of that handsome Prince and that The Evil Stepmother actually had a decent bone in her old body?

If you are looking for some sexy and steamy scenes, then look elsewhere.  There isn’t much in the steamy department.  While I enjoyed the attempt of creating a new fairy tale long after the original ended, I wasn’t a huge fan of the book.  It had such promise and could have been so much more, but it my opinion this book was just okay.  It was an easy read with not much to absorb and the Prince was not what I was expecting as a Prince.  The pace was slow in many parts of the book, making this a much longer read that it should have been.  I actually struggled to finish this one where as it should have taken me no time at all.

If you are looking for a different HEA for your favorite fairy tales, then give this book a chance.  It could have been that it wasn’t my cup of tea since I am a huge Cinderella and Snow White fan.