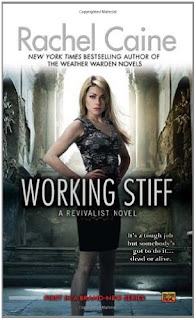 Bryn Davis was killed on the job after discovering her bosses were selling a drug designed to resurrect the dead. Now, revived by that same drug, she becomes an undead soldier in a corporate war to take down the very pharmaceutical company responsible for her new condition…


Since Rachel Caine is one of the wonderful authors who have mastered the vampire niche, I was thrilled to discover that she was going to include the world of zombie like creatures as well!  While her vampire series is focused on the young adult crowd — and adults who are addicted to them too! — her Revivalist series is focused on the adult genre.  While I have never been a huge fan of the zombie craze, I was ready to open them with open arms and dive into the dark side with Rachel Caine.


Talk about some bad luck!  Bryn’s first day on the job at a local funeral home goes from bad to worse when she ends up dead.  Her boss is involved in some shady dealings with a top secret drug from pharmaceutical company Pharmadene.  When she gets caught snooping into the private meeting, she finds herself becoming one of the clients on the steel table.  Yet, when she awakes she finds herself revived and not in the here after.  She is given the secret drug and brought back as a sort of zombie like creature by undercover agents Patrick McCallister and Joe Fideli.  Bryn is forced to work with them to bring down the company that is creating this drug.


Now when I think of zombies I think of brain eating, flesh sagging, brainless creatures.  Author Rachel Caine brought zombies to a better evolved typed of zombie.  On the outside, Bryn appears to be a normal human being.  Unfortunately, she is just being kept alive because of the drug.  If she doesn’t get a shot, her body starts to decay like any normal dead body.  Basically Bryn is dependent of the drug that she is trying to stop being produced.  I liked the dynamics of the plot and loved each of the characters involved.  I absolutely loved Joe Fideli the best though! He was hilarious and at very protective of his family.  I didn’t really like Patrick at first though.  He seemed cold and distant which made it hard for the romance to progress for me.


Even though the romance was not what I liked, the story and story progression was wonderful.  I love this new and creepy series and can’t wait to read about what is to come for Bryn!