I am choosing Surrender To Me by Shayla Black.  This one doesn’t release until March 2011, but I want this one so bad, that I keep checking out her website just in case she updates that it is being released early! LOL 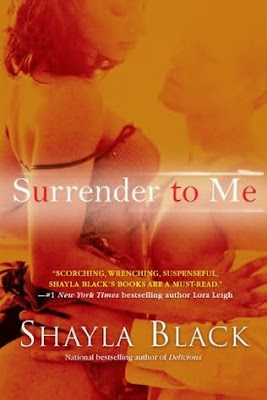 A secret fantasy.
Hunter had everything until a bullet iced his career as a Navy SEAL. Restless and uncertain about his future, he accepts an intriguing proposition: share an acquaintance’s girlfriend and fulfill her fantasy of a ménage. It should have been just a night of sexual adventure between three consenting adults. But Kata is like no other girl Hunter has ever met. By turns audacious and sexy, then vulnerable and aloof, she’s a heartbreaker he’s determined to master. But he needs more than one night. And he wants to do it alone.
An uncontrollable obsession.
Kata never expected to leave her comfortable relationship and explore something so dangerously forbidden with a stranger. Hard as she tries to resist, the guilty pleasure overwhelms her, and she surrenders herself, inch by inch, to the hardcore man who wants her for himself. Consumed by blazing desire, they’re soon threatened by the shadows of the past. And now to keep Kata safe, Hunter makes her a bold proposition of his own. Saying yes will destroy her heart. But saying no could cost Kata her life.

10 Responses to “WOW: Waiting on Wednesday”