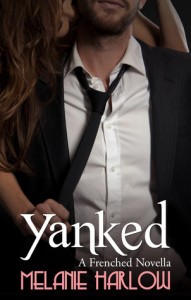 Mia Devine fell hard for Lucas Fournier after their magical week in Paris. But eight months later, the free-spirited half-French musician still hasn’t made any promises about their future. And as magnifique as long-distance phone sex is, nothing compares to the real thing.

Fed up with stolen weekends and lonely nights, Mia flies to New York armed with a list of reasons why they should take the next step, but an unexpected guest in Lucas’s apartment derails her plans. He’s been keeping secrets–worse, he claims he’s happy with the way things are.

Without the magic of Paris, can their mismatched love survive?

No.
Just no.
As my mom would say, “Damn. Damn. Double Damn. Triple Damn. Hell”

If you are like me and enjoyed the first novel, Frenched, then I will warn you that Yanked will give you the ‘hate feels’.  You don’t even know how many times I wanted to throw my precious Kindle across the room.  I cussed. I cried. I begged for the author to turn this book around when I was at the halfway mark. How could the author do this to us?! Our beloved Lucas was completely changed.  The things he does in Yanked is so out of character — at least in my opinion.

When Mia discovers his secrets, I couldn’t believe she just rolls over, accepts it and forgives him! What the hell was this woman/character thinking? I would not only have beat the crap out of Jessica — if you read the first book you know this is the ex of Lucas — but I would have told Lucas to enjoy being alone as I threw his home deco at him.

Then the author goes and sweeps it under the rug and makes it all better by the end. Um, no. The damage is done. I can’t forgive and forget as easily as Mia. I wish I had listened to the other reviewers and skipped this installment even if there is a major revelation of sorts near the end with Lucas and Mia.