Was surfing on Goodreads tonight and came across the new cover for The Reluctant Vampire by Lynsay Sands. (who just happens to be one of my favorite authors of all time!) 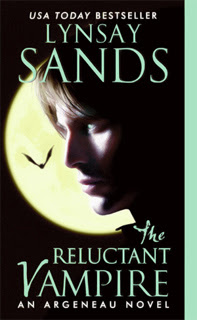 THE RELUCTANT VAMPIRE
An Argeneau Novel
Release Date: May 31, 2011
SUMMARY FROM THE AUTHORS SITE:
Harper lost his lifemate, Jenny, during her turn and has blamed himself for her death ever since, so he’s rather happy for the distraction when Tiny and Mirabeau arrive with a young immortal in tow. Stephanie McGill is a young newly turned, immortal who is being hunted by a mad no-fanger named Leonius. When Anders and Drina Argenis (Argeneau) arrive to help, Harper finds himself working with the beautiful young Spanish woman. But things get interesting when Stephanie decides to take on the role of cupid and bring Drina and a reluctant Harper together. How much trouble could a newly turned teenage vamp be?