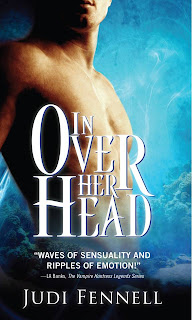 In Over Her Head
By Judi Fennell

When Erica Peck, one terrified-of-the-ocean marina owner, finds herself at the bottom of the sea conversing with a Mer man named Reel, she thinks she’s died and gone to her own version of Hell. When the Oceanic Council demands she and Reel retrieve a lost cache of diamonds from the resident sea monster in return for their lives, she knows she’s died and gone to Hell.

When they escape the monster and end up on a deserted island, she amends her opinion – she’s died and gone to Heaven.

But when Reel sacrifices himself to allow her to return to her world, she realizes that, Heaven or Hell, with Reel, she’s In Over Her Head.

I decided to step out of my vampire zone and try a different type of paranormal read this time. This book is about the people who live under the sea. Mer Men, as they call themselves, who have their own life and community under the sea that we have all heard in stories growing up. Atlantis? Sea Monsters? The Loch Ness? Yep, they all exist. Overall this book is one that I am glad I am adding to my bookshelf. It was well paced with characters I actually cared about. I was hooked on the first chapter all the way to the end. This is the first in a series and I am looking forward to her next books. I actually care to find out how the supporting characters in this book end up in the rest of the series. There was plenty of action, just the right amount of dialogue and scene set up, and most of all the romance was great! Now if only the next book would hurry and come out!

4 Responses to “In Over Her Head by Judi Fennell”