Today her new release THE RENEGADE HUNTER is available for purchase! This is her latest in the Argeneau series. I personally can’t wait for the kids to get to school this morning so I can go pick it up! 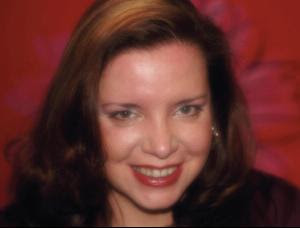 Welcome Lynsay to My Overstuffed Bookshelf! Let’s get started!

1. Besides Renegade Hunter, what other books do we get to look forward to be released soon?

After Nicholas’s story, The Renegade Hunter, comes Tiny’s story which is in the Valentine’s anthology Bitten By Cupid. It comes out in January 2010. Armand’s story and then Cale’s (one of Martine’s sons by her first life mate) come out back to back in the fall of 2010. I can’t tell you a definite release date as that’s still to be decided by Avon, but I believe it’s September and October.

2. Are any of the other Argeneau family going to be expecting little vampires soon?

Well you know Lissianna and Greg have already had a little one, Luciana. There are definitely more little Argeneaus to come but I can’t tell you much more than that as it’ll spoil all the fun! Pregnancy by immortal and mortal women alike can be tricky and while they’re only allowed one every hundred years or so, they also live a heck of a long time so don’t have biologoical clocks ticking and can relax and enjoy each other for a bit before worrying about making little ones. So don’t expect there to be a slew of baby Argeneaus in the next book. Although that would be really funny wouldn’t it? Especially if the all men were left to look after them while the women solved the case! LOL

3. Which Argeneau is your personal favorite?

Lucian would be my favorite male character as I have a weakness for the crusty, marshmallowy type men. And if I had to pick a favorite female character then I would have to choose Marguerite. She is the backbone of the family after all!

4. Do we get to see a sequel to Devil of the Highlands?

5. Do we get to see little Luciana grow up and have parts in other Argeneau books in the future?

Possibly but you will likely only see her as a child. My timelines aren’t much faster than ours so it’s doubtful we’ll get to see her all grown up. Then again you never now… 😉

6. Who spoils Luciana the most, Marguerite or Lucian?

Well by all outward appearances that would be Marguerite but in secret Lucian spoils her rotten! LOL

7. Are any of your characters based on anyone in your life?

Hmm… that’s another good question. Yes, many of my characters are based in part on people I know or have known. And no character is the complete embodiment of any one person. The Argeneau characters are in this sense unique individuals that express themselves in ways that even surprise me at times.

8. Can I be your next Argeneau girl? Name the heroine Amy, okay.

Thank you and take care,