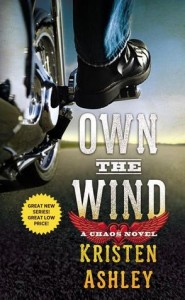 Own the Wind
Series: A Chaos Novel #1
Author: Kristen Ashley

Tabitha Allen grew up in the thick of Chaos–the Chaos Motorcycle Club, that is. Her father is Chaos’ leader, and the club has always had her back. But one rider was different from the start. When Tabby was running wild, Shy Cage was there. When tragedy tore her life apart, he helped her piece it back together. And now, Tabby’s thinking about much more than friendship…

Tabby is everything Shy’s ever wanted, but everything he thinks he can’t have. She’s beautiful, smart, and as his friend’s daughter, untouchable. Shy never expected more than friendship, so when Tabby indicates she wants more–much more–he feels like the luckiest man alive. But even lucky men can crash and burn…

Own the Wind is the first book in the Chaos Novels by author Kristen Ashley. It is a spin off from the Dream Man series with the main characters being Parker “Shy” Cage and Tabitha “Tabby” Allen.

After reading Motorcycle Man and getting the “Tack” tingles, I was excited to hear about a spin off series featuring the other Chaos MC members.  I really didn’t think another character could measure up to the pedestal that I had Tack on, but the author came pretty close with Shy Cage.  Like the book mentions, he is like a younger version of Tack. Which makes it more Kristen Ashley crack with no sleep until the book is finished. Yes there are run-on sentences,  over used words, and plenty of dialogue that needs deciphering, but it is still addictive.  I swear there must be hidden messages in the wording because once you start one, you can’t put it down.

Tabby Allen is the Tack’s daughter. Tack is the head of the Chaos Motorcycle Club. So this makes Tabby the princess for lack of better words.  She has been sheltered and protected ever since she started living with her father.  She has also had a secret crush on Shy Cage.  Shy is a trusted member of Chaos.  He is also a player and enjoys his random hookups as much as possible.  When Tabby needs to be brought in from a bad situation, Shy decides to teach her a hard lesson.  What happens ends up breaking Tabby’s heart and she moves on from her crush with Shy.  Fast forward and she is getting married to Jason who is just a regular guy and not part of the MC world.  When he unexpectedly dies in a car wreck 3 weeks prior to them getting married, Tabby is crushed.  This sets up the status of “single” for Tabby.

I for one didn’t like Tabby in this book.  To me she is too compliant even though she is suppose to have a backbone being Tack’s daughter.  I felt she just went along with things and never really stood out as her own character in Own the Wind.

Shy was hot. There is no other way to describe him. He is definitely letting off the Tack vibe and I could actually picture him being a younger version of Tack.  This made for sexy scenes and hotness whenever he spoke or sauntered into a room.

The ending felt rushed and it was kind of let down in the action scene being off the page.  I would have liked to have read about the big bad meeting that they went to in order to find Natalie (Tabby’s drugged up best friend).  The epilogue was classic Kristen Ashley with the reader getting a sneak peek into the future for this couple.

While I loved revisiting the Chaos Motorcycle Club — plus other characters in the Dream Man series — it didn’t have quite the impact that Motorcycle Man had to me.  While fans of this author don’t want to miss out in this new spin off series, new readers might want to at least read the last book in the series that it originated from.  Not necessary but it might set up the club members for you a little better.

“May feel like you’re falling’, Tabby, but remember, I’m at the bottom ready to catch you.” — Shy

One Response to “Review: Own the Wind by Kristen Ashley”